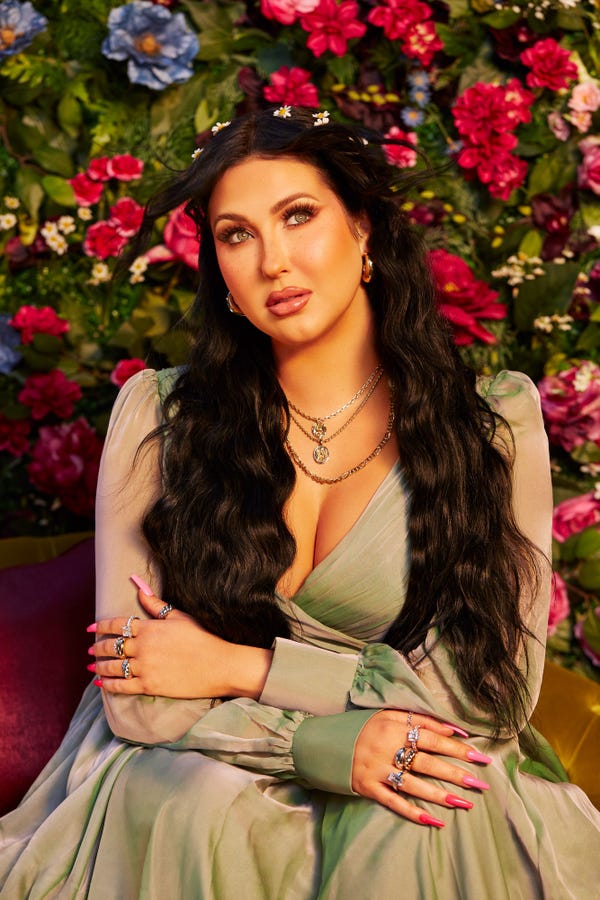 Jaclyn Hill made a name for herself in an industry where airbrushed photos and highly-edited Instagram captions are the norm. But as I chat with her via

, she’s unfiltered in every way — from her casual sweats and no-makeup look to her blunt words.

The makeup mogul, who has 5.6 million YouTube subscribers and 7.6 million Instagram followers, is known as one of the original beauty influencers who rose to fame on YouTube. Her career led her to start beauty trends, have record-breaking product collaborations, and create makeup and jewelry brands.

Hill has also faced her fair share of scandals — most notably in 2019 when her brand, Jaclyn Cosmetics, launched lipsticks that customers said arrived damaged, with some products coated in white fuzz. (Jaclyn Cosmetics denied the products were dangerous and issued refunds to all customers.)

It’s experiences like the latter that have shaped Hill into someone who is both the product of her past and someone entirely different.

“I started off my career at 20, and now I’m 31. So at this point, if you don’t want to buy a product because you don’t trust me, my thought is, ‘You literally don’t know me,'” she says. “I’m a person on the internet, and for some reason, I’m a trigger to you?”

Her first YouTube video — a grainy, 10-minute clip filled with close-up shots and minimal editing — was a tutorial inspired by Kim Kardashian. At the time, Hill had hopes of sharing her love of beauty and maybe furthering her career as a makeup artist.

“Success back then wasn’t turning your full-time job into social media,” she tells me, noting that you might earn $1,500 a month through advertisements if lucky. “YouTube videos allowed you to get clients.”

At the time, according to Hill, the “refreshing” world of online beauty was filled with a community of women “falling in love with makeup” before the industry exploded. And she knows it was a phenomenon that will never happen in the same way again.

“Now it’s a job, and millions of people have a career where their entire life is based on social media,” she says. “When I started doing this 11 years ago, that was not happening.”

An oversaturated beauty industry was also unheard of at the time, but it’s the reality brands and influencers are living today. Revlon filed for bankruptcy in June, Clarisonic shut down in 2020, and Becca Cosmetics — a brand Hill helped rise to fame before disputing over an unreleased product — dissolved in 2021.

“When I heard about Becca, it was devastating, even though my relationship with Becca did not end on good terms,” Hill says. “I was like, ‘What? Becca?’ That’s not how it used to be.”

The conversation reminds her of past collaborations she worked on with Morphe. She recalls setting records by “selling hundreds of thousands of pallets in one hour,” but goes dim when realizing the same likely wouldn’t be possible today.

Ultimately, Hill is both sad for brands that have shuttered and scared for brand owners.

Even Hill herself has stepped back from the beauty industry in some ways. She’s stopped posting makeup tutorials regularly — something her earliest fans often take issue with.

“I love makeup tutorials. If I had it my way I would film a makeup tutorial twice a week, because that’s where I came from,” she says. “But at the end of the day, if I post it and the engagement isn’t there, that means not that many people actually want to see it, and therefore it’s a waste of my time. I can’t just sit around and film all day, every day, and push stuff out.”

“It’s just the circle of life,” she says. “Everyone has to come to terms with the fact that whatever they’re doing right now is not going to last forever. I always knew that. When I was selling millions of palettes with Morphe, I would say every week, ‘This is not going to last.'”

“I am so proud to be a part of the original YouTube community,” she says. “And I’ve also grown into a different era and I am adapting. I know some people have kind of thrown in the towel, they give up because it’s hard, but I’m all about it.”

Scandals sometimes overshadow successes, but Hill takes that in stride

Whether you agree or disagree that Hill has adapted, there’s no denying she’s persevered.

She continued to sell makeup after failures, and her namesake brand is now sold at Ulta Beauty. There’s also Jaclyn Roxanne, her jewelry brand. According to Hill, the line’s initial launch “blew” her makeup endeavors “out of the water.”

All the while, comments about her failed lipstick launch follow her. While Hill says the incident was “devastating” and “life-shattering,” she’s moved on.

“At this point, I can finally say for the first time that I’m genuinely over it,” she says, adding that those who continue to mention it are “simply trolls.”

“My lipstick did not hurt anybody. There was no lawsuit, you know what I’m saying?” she says. “The internet got very loud, and whoever didn’t like me or thought I was a liar or whatever it may be, that was their opportunity to attack.”

Still, when I ask Hill what the most difficult moment of her career has been, I expect her to bring up the scandal. Instead, she says it’s the day-to-day tasks her job entails.

“It’s not very glamorous, which I know kind of breaks people’s hearts, but it’s the truth,” she says.

Another truth, she says, is that the public doesn’t truly know her — even if they think they do.

“But at the same time, if I were to be like, ‘Look at all the stuff I really do have, and look at all the donations I make,’ they’d be like, ‘You are a bitch,'” she added. “So you just gotta sit back and accept it. They don’t know who I really am and that’s fine.”

Today, Hill’s focused on growing her brands and living her best life

One reason Hill has stopped looking to the past is that her present and future is, quite literally, shining in silver and gold.

“I love accessories,” Hill says. “Even when I was broke as could be, I was wearing little 90-cent beads on my wrist. So I just wanted to come out with beautiful pieces that aren’t going to break the bank.”

Her brand’s jewelry was inspired by the styles Hill loves to wear, and its name has family ties close to Hill’s heart.

“Everyone knows me as Jaclyn Hill, but I got divorced a few years ago and I got so sick of the last name,” she says. “My dad, who passed away two years ago, called me either Sweet Pea or Jaclyn Roxanne my whole life. My friends call me Roxanne. So it’s very personal.”

Despite her growing jewelry brand, Hill says she has a loyalty to makeup and “can’t imagine” life without it — even if strangers online wish she’d give it up.

“I don’t care anymore,” she said of critics and controversy. “My products are amazing now, so moving on.”