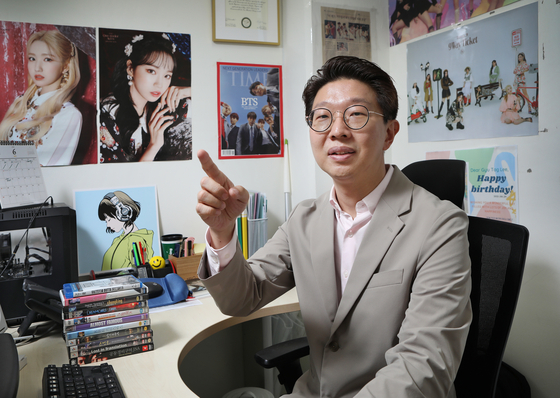 Lee Gyu-tag, a professor of cultural studies at George Mason University Korea, sits down for an interview with the Korea JoongAng Daily at his office in Songdo, Incheon, on June 15. [PARK SANG-MOON]


K-pop continues to grow across the globe and it’s not just boy band BTS making it big — other groups are landing higher and higher on international music charts. With a unique set of rules that sets it apart from other industries, K-pop is becoming not only a driving force for pop culture, but opening up a new chapter in Korean history. In the following interview series, the Korea JoongAng Daily will sit down with Korean music critics who have been following the growth of this unique industry and ask, “How did it happen and will it last?”

One of the hottest issues in the world that isn’t being discussed actively in Korea is cultural insensitivity. K-pop is no exception, often subject to criticism regarding cultural appropriation by its artists.

Singers frequently wear — be it out and about or for photo shoots and music videos — hairstyles or outfits that resemble the traditional style or attire of different cultures without realizing it may be insulting, later apologizing when they’ve been reproached by international audiences.


“Koreans love to see K-pop and K-culture expand to other countries, but are not interested in learning about other countries’ cultures,” says Lee Gyu-tag, a professor of cultural studies at George Mason University Korea. “This lack of reciprocity often explains why we keep seeing cultural appropriation — imitating another culture without showing respect or understanding — in K-pop.”

While the popularity of K-pop seems to now be more global than ever — with more album sales and YouTube views coming from outside of Korea than domestically — such repeated controversies raise questions of whether K-pop has truly become global. 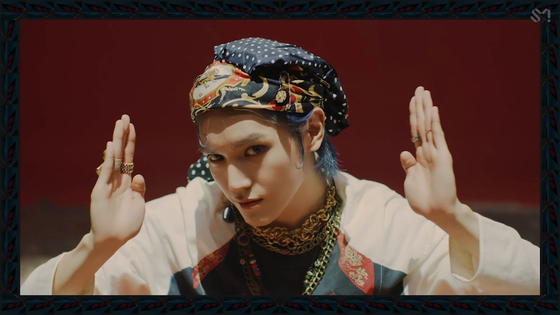 
Originally an English major at Seoul National University, Lee earned his cultural studies doctorate at George Mason University with a dissertation on the globalization of K-pop and has been teaching pop music and media studies at George Mason University Korea since 2015. He is also a member of the annual Korean Music Awards’ selection committee and is known for his books including “The K-pop Age” (2016), “K-Pop in Conflict” and “K-pop Nationalism” (2020).

Lee sat down for an interview with the Korea JoongAng Daily to talk more about the complex relationship between cultural sensitivity and K-pop. Below are edited excerpts from the interview at his office on campus in Songdo, Incheon, on June 15.


Q. Last month, HyunA came under fire for posting pictures of her wearing an afro-style wig. A similar thing happened a year ago with Blackpink’s Lisa wearing box braids. Why do cultural appropriation scandals keep happening in K-pop? 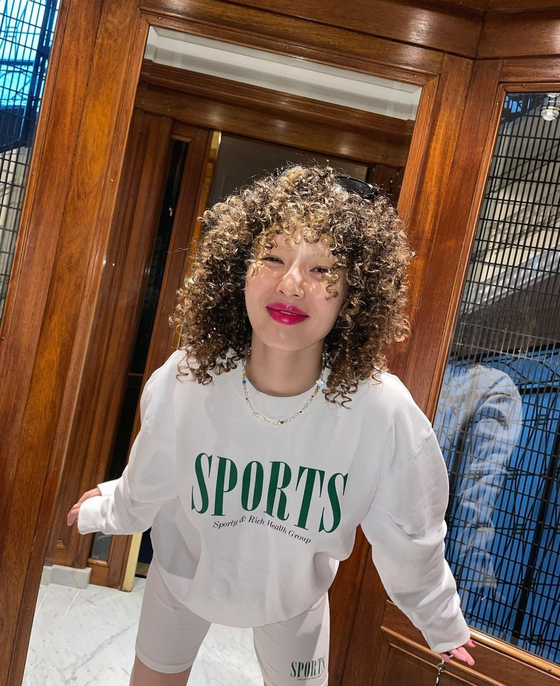 HyunA uploaded a photo on Instagram showing her wearing a curly wig she picked up from a Paris beauty store for afro-textured hair. Her post was met with backlash from international fans, criticizing her for cultural appropriation. [SCREEN CAPTURE]

A. K-pop artists, agencies and [Korean] fans are all still quite ignorant in that area. For instance, K-pop is heavily influenced by African-American culture, but hardly anyone in Korea knows or really cares about that. I doubt that the K-pop idols know much about the African-American roots of the music and fashion they present.

So we end up seeing repeated controversies about K-pop stars wearing their hair in dreadlocks. On top of that, as a relatively homogenous nation, it’s harder for Koreans to grasp how much black culture and heritage mean to the African American community, and thus why imitating other cultures without much thought is so offensive. 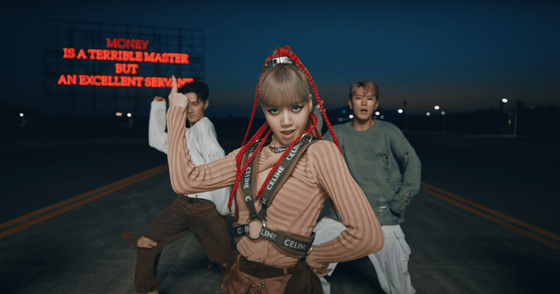 
That’s why whenever there’s backlash due to cultural appropriation, Koreans usually express confusion about what’s so wrong about it, while foreign fans — oftentimes African-Americans — take great offense.

Of course, the backlash isn’t always fair. Some of them are a bit far-fetched. Nonetheless, after all those scandals, you’d think the K-pop industry would know better by now. We’re not quite there yet.


What causes Koreans’ general indifference toward other cultures?

It’s not nationalism or ethnocentrism. It’s simply a lack of interest in learning about other countries.

Look at Korean society’s current discussion on K-pop. It centers around how popular K-pop is abroad and whether BTS is going to top the Billboard charts or not. No one talks about the influence of foreign music elements on K-pop.

Some say Koreans only care about the United States, Japan and China. But even then, the main focus is, “What do they think about us?” Koreans don’t really care to learn about American history or culture either, which explains the frequent appropriation of African-American culture. Even Anglo-American pop music doesn’t see that much success in Korea, and fewer people listen to music from non-English speaking countries.

We’re so proud of K-pop gaining popularity around the world, but there’s just no give and take.


Are there examples of K-pop artists who successfully showed respect and understanding toward other cultures?

A notable case is BTS, which started as a hip-hop group. Shortly after their debut, the members appeared on the reality show “BTS American Hustle Life” (2014) in which they went to the U.S. and trained with African-American rappers Coolio and Warren G. They really showed an effort to learn about the roots of hip-hop and develop a deep understanding of the genre.

BTS, which started as a hip-hop group, appeared on Mnet’s 2014 reality show “BTS American Hustle Life” in which they went to the U.S. and trained with African American rappers Coolio and Warren G. [SCREEN CAPTURE]


Years later in 2020, BTS donated to Black Lives Matter (BLM) after George Floyd was murdered and protests ensued worldwide. In my opinion, BTS expressing its support for BLM and making a donation was a very wise choice. There was outrage around the world, especially among the younger generations abroad, who are the main consumers of K-pop.

From the perspective of international fans who share the idea that K-pop has been heavily influenced by black culture, it doesn’t make sense for BTS — a K-pop group based on hip-hop — to turn a blind eye to such an important issue affecting the black community. But I know there was a bit of a debate at the time because Korean fans don’t want their favorite stars to get political. 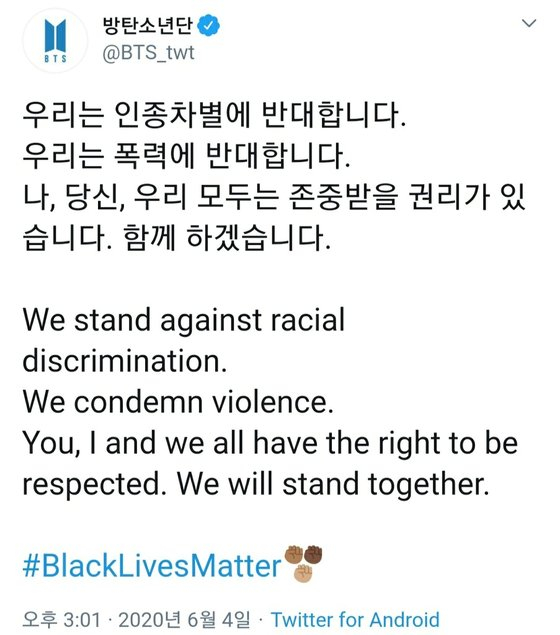 
As seen in the case of BTS and BLM, foreign fans generally want K-pop artists to be vocal about social issues while Korean fans expect them to remain apolitical. Why is that so?

There’s a fundamental difference between how international fans and Korean fans perceive K-pop. This is where most of their different stances stem from.

To foreign fans, especially those in Western society, K-pop is something innately non-mainstream. There is something about K-pop that speaks to the underdog spirit, regardless of how popular it continues to grow outside of Korea.

That’s why K-pop is heavily associated with support from non-white minorities, the LGBTQIA+ community, and Gen Z, who are not in the mainstream of society’s age hierarchy. So we see cases of global K-pop fans uniting to stand against Donald Trump and white supremacy. 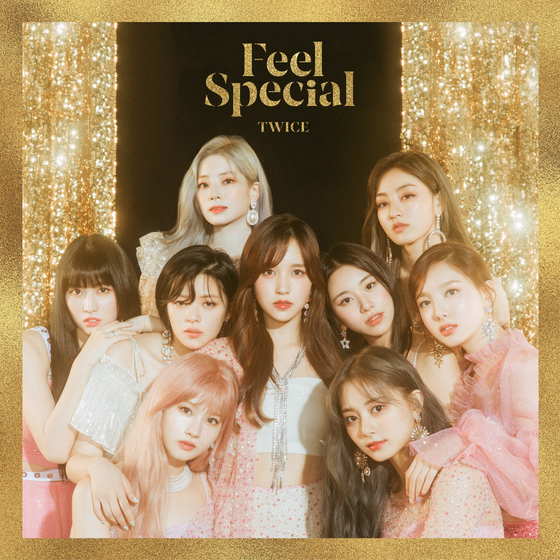 The song itself contains no political meaning, and members of Twice have never expressed their political opinions. Nonetheless, “Feel Special” was assigned a certain political meaning by foreign fans because, to them, K-pop intrinsically represents this sort of minority spirit. This is also why foreign fans tend to expect K-pop artists to take and vocalize a certain sociopolitical stance.


Tell us more about Korean fans’ expectations toward K-pop stars.

In Korea, K-pop is completely part of mainstream culture. If anything, K-pop idols are viewed as products meticulously designed by the entertainment industry to appeal to the mainstream audience. So, domestically, K-pop does not represent any minority whatsoever, and Korean fans don’t expect K-pop artists to do so in the first place.

Being a mainstream artist means you have to strive to appeal to a very wide audience and make sure to offend nobody. It makes sense for Korean fans to not want BTS to risk making a political statement. 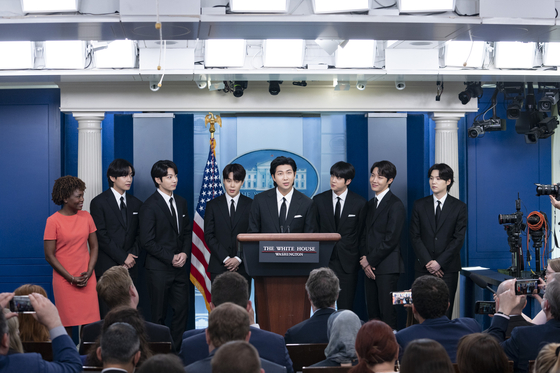 RM, leader of BTS, speaks in the James S. Brady Briefing Room at the White House in Washington on May 31. BTS was invited to the White House to discuss anti-Asian hate crimes and Asian inclusion with U.S. President Joe Biden. [EPA/YONHAP]


Another factor is that Korean fans recognize K-pop as something Korean, and this national identity comes first and foremost to them. Korean society tends to view BTS as something that represents Korea, the way [football player] Son Heung-min represents Korea when he’s playing on the national team. So when we see K-pop gain global popularity, we’re not just proud as fans of a certain artist, but also feel a broader sense of nationalistic pride.

Meanwhile, foreign fans think of K-pop as more of a global culture that they share. Their expectations are bound to differ. As local and international fans collide, it’s only going to become more challenging for K-pop artists to respond to contradicting demands. K-pop’s global expansion will also continue to raise the standard of cultural sensitivity expected from artists and their works.


How can K-pop and Korean fans improve their cultural sensitivity?

In the short run, the singers, fans and most importantly the agencies really need to start educating themselves about other cultures. A cultural sensitivity curriculum should be part of the idol groups’ training process. If we’re celebrating the global popularity of K-pop, it also means we must keep in mind that whatever the K-pop industry releases, the entire world is going to see it.

In the long run, Koreans as a whole need to take more interest in learning about other cultures. First of all, we need to change the way we discuss K-pop. Rather than just asking if BTS is popular in another country, we should also ask what part of K-pop and BTS appealed to foreigners in their cultural context. Then we naturally get to learn about their culture. 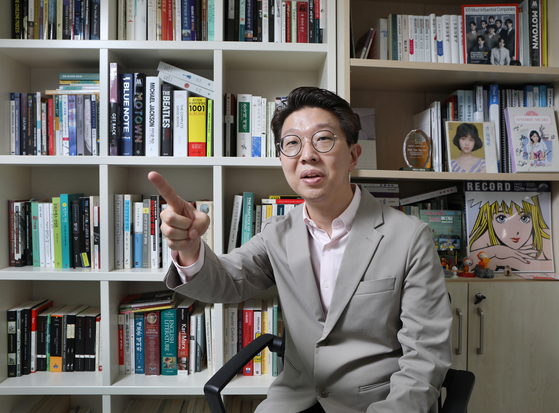 
Reciprocity is the right thing to do not only from my perspective as a cultural studies professor, but also strictly from a business standpoint. I remember attending a conference about Asian cultural exchange and a Burmese college professor told me, “K-pop is very popular in Myanmar. But most Koreans don’t even know where Myanmar is, let alone ever having listened to Burmese music,” which he found disheartening. If we only want to export our own culture without any willingness to consume theirs, there’s bound to be discontent. That can’t be good for K-pop or the Korean wave in the long run.

Give and take is the most basic of common courtesies. Ideally, more opportunities for cultural exchange should be incorporated into Korea’s public education and mass media. Koreans may be indifferent now, but exposure and education will create room for more interest in the future.