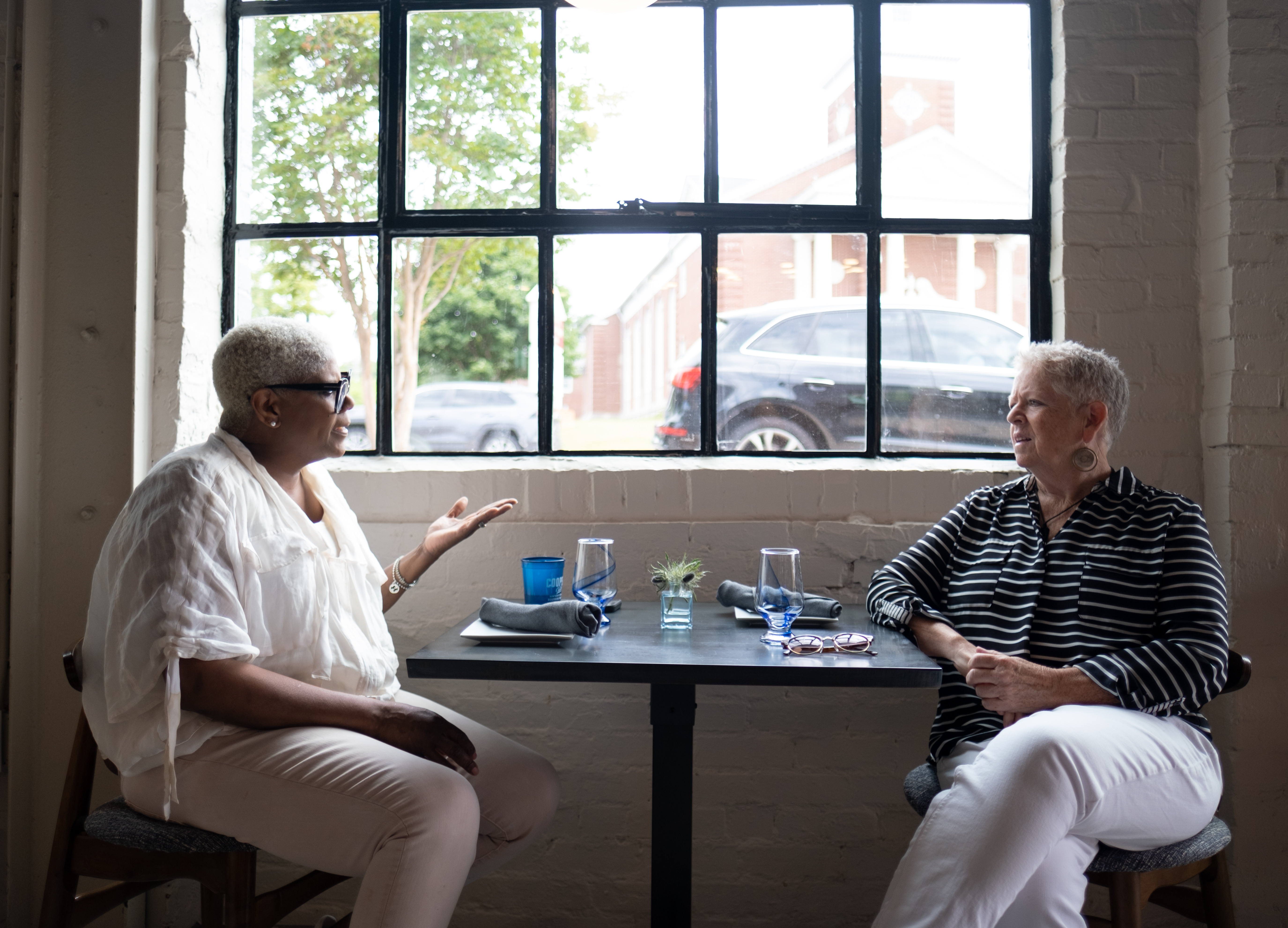 Oreatha’s at the Point co-owners Deborah VanTrece, left, and Shea Embry chat before the restaurant opens for brunch. Ben Gray for the Atlanta Journal-Constitution

Oreatha’s at the Point co-owners Deborah VanTrece, left, and Shea Embry chat before the restaurant opens for brunch. Ben Gray for the Atlanta Journal-Constitution

Cascade Heights is one of several recent examples of neighborhoods previously overlooked by well-known restaurateurs and developers that have landed high-profile restaurants or larger developments with multiple food and beverage concepts.

It’s a trend that’s being seen across the country, said professor Cathy Yang Liu, chair of the Department of Public Management and Policy at Georgia State University. It was spurred in part when many businesses closed their retail spaces and moved to online-only business models during the pandemic, allowing restaurateurs to launch new concepts in those vacant buildings.

“Restaurants started to move in where other businesses once were and became anchors in those neighborhoods,” Liu said.

Even one anchor restaurant, Liu said, can change the landscape of a neighborhood by prompting other businesses to update their buildings, increasing foot traffic and bringing more businesses and investment to the area.

“What sometimes starts with one restaurant can end up having a bigger impact than that. With increased foot traffic, a whole street and even neighborhood may start to change.”

Executive Chef Christian “Lucke” Bell stirs beans for huevos rancheros in the kitchen of Oreatha’s at the Point. Ben Gray for the Atlanta Journal-Constitution 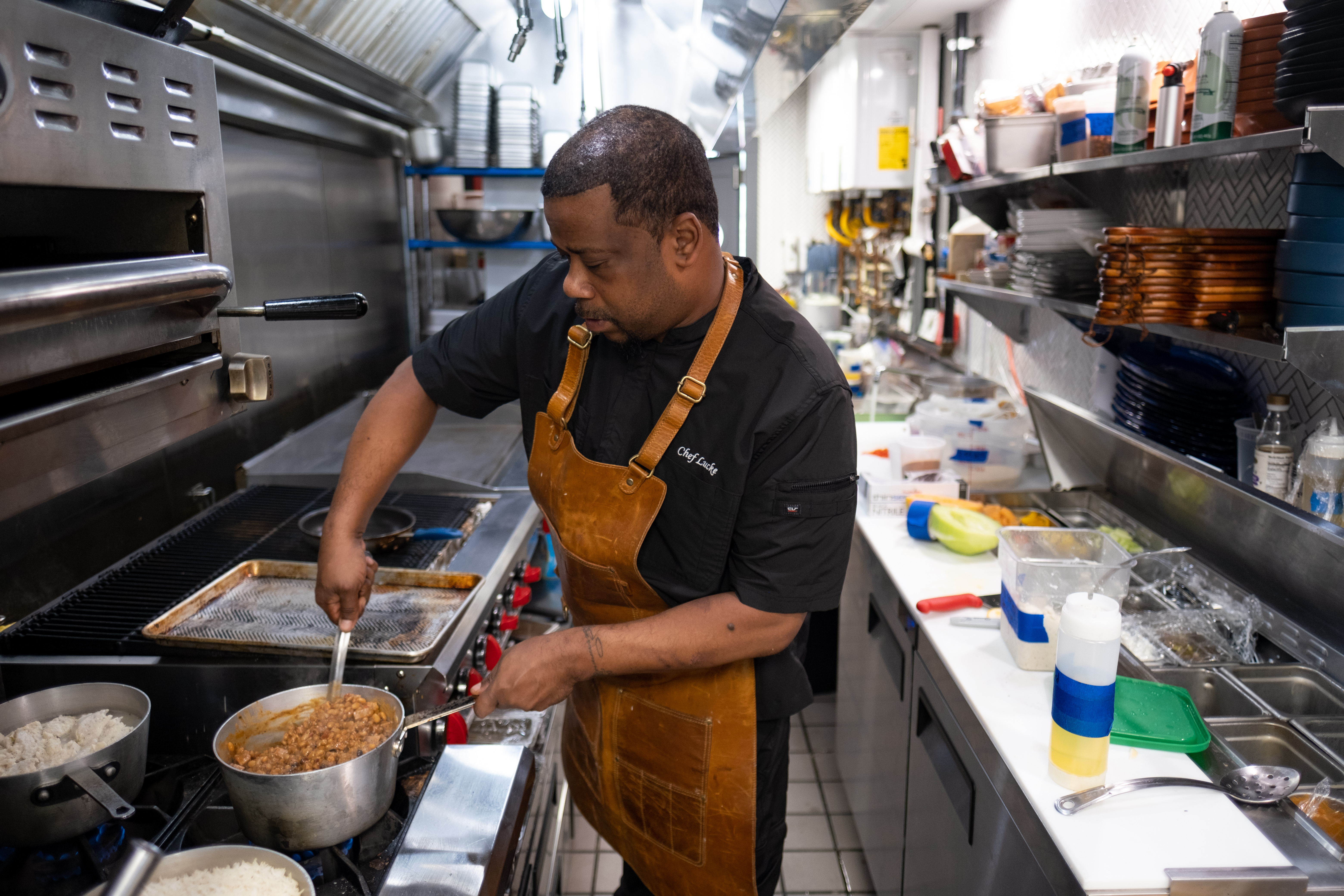 Executive Chef Christian “Lucke” Bell stirs beans for huevos rancheros in the kitchen of Oreatha’s at the Point. Ben Gray for the Atlanta Journal-Constitution

The partnership that led to Oreatha’s started as many relationships these days do: on social media.

Embry, who has lived in Cascade Heights for years, sent Van Trece a Facebook message in mid-2021 asking her to meet to discuss ideas for some properties she owned.

Van Trece, a former flight attendant who opened her first restaurant in East Atlanta in the late 1990s, started to gain recognition in wider circles after relocating her upscale Southern restaurant Twisted Soul Cookhouse and Pours from Decatur to West Midtown in 2016. Embry’s message, and the opportunity to explore Cascade Heights, piqued her interest.

“The minute I came upon this small area that had been here for years, but I’d never given it a second glance, I could feel, something’s new here, something’s going on,” Van Trece said.

Embry, who bought the property in 2016, didn’t set out to open a restaurant; in fact, she had no previous experience in the restaurant industry. But she was committed to bringing Black-owned businesses to the neighborhood that would enhance the area.

“I’m known for uplifting communities, and I do that from within, not by being outside,” Embry said. “I come from a space of knowing that gentrification happens, and I want to respect that and to support the existing community.”

The Hill Social restaurant is one of only a few restaurants within walking distance to Atlanta University Center students. (Arvin Temkar / [email protected]) 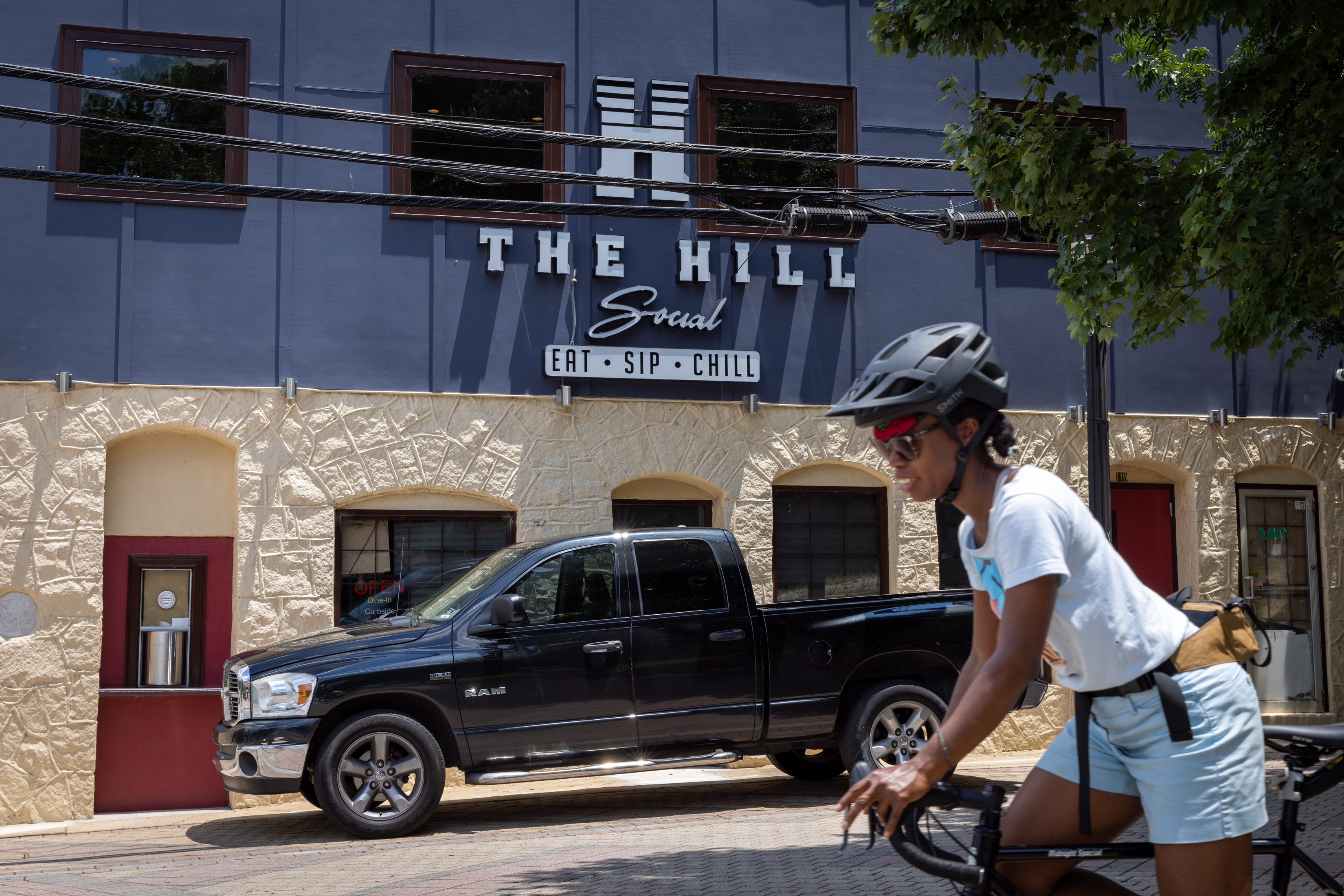 The Hill Social restaurant is one of only a few restaurants within walking distance to Atlanta University Center students. (Arvin Temkar / [email protected])

Restaurateur Anne Quatrano, who opened Bacchanalia in what is now Westside Provisions District in the early 1990s before the explosion of growth in that area, said anchor restaurants are essential to the growth of a community.

It’s a sentiment shared by Charles Hill II, who, after years of planning, opened The Hill Social, a restaurant and bar on James P. Brawley Drive in the Atlanta University Center neighborhood earlier this year. It’s one of only a few restaurants within walking distance to students who live on the campuses of the AUC, the consortium of HBCUs including Hill’s alma mater, Morehouse College, Clark Atlanta University and Spelman College. 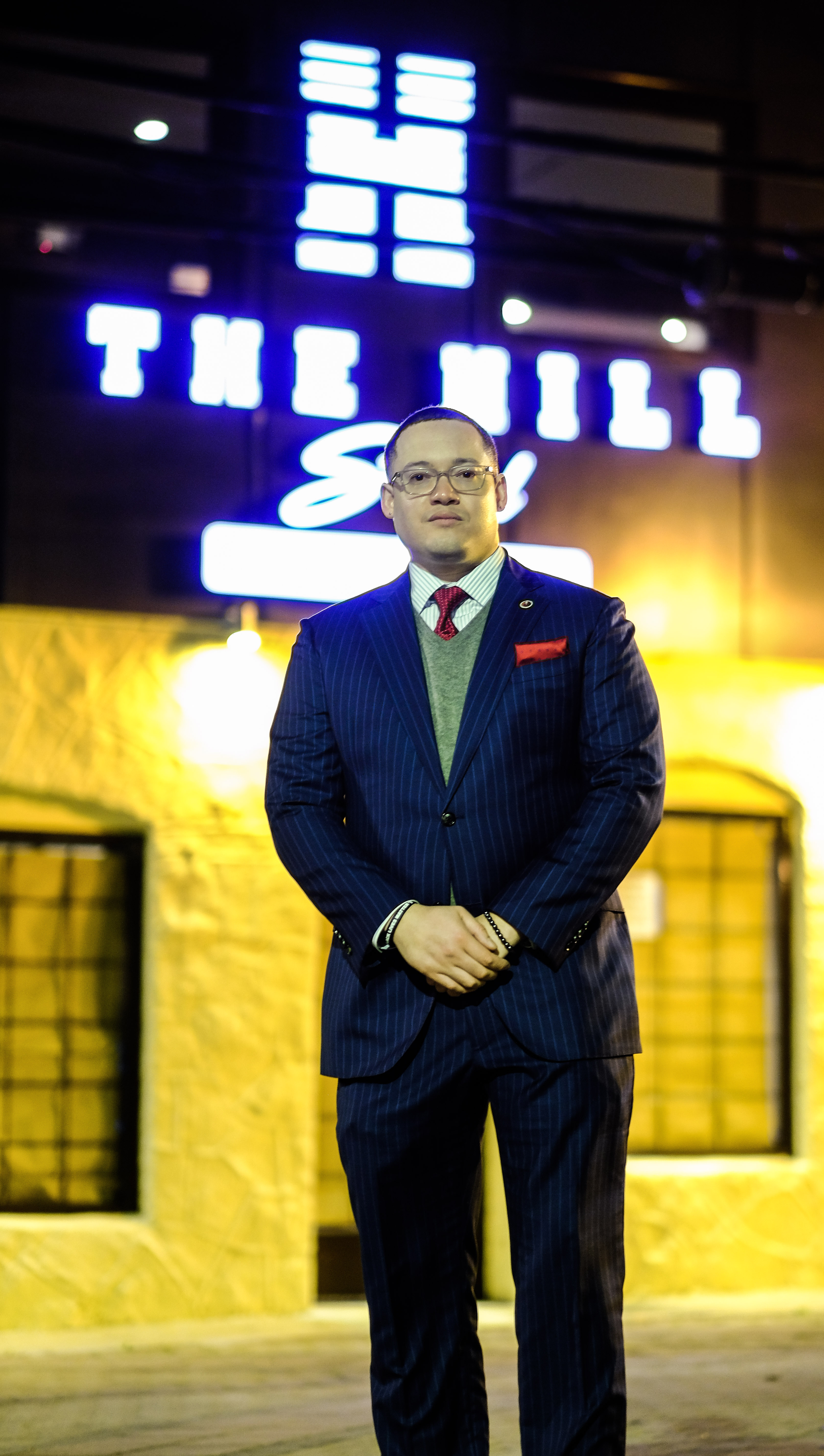 The building, constructed in 1900, was most recently home to a Black-owned realty company on the upper level and a beauty salon and barber shop on the lower level. Hill, a first-time restaurateur, decided to enter the industry in part as a way to spur development in the neighborhood he’s grown to love and now lives in.

“There are a lot of amenities that AUC students don’t have,” he said. “HBCUs have lagged in many ways in terms of development of amenities on campus or campus adjacent.”

Hill hit several obstacles on his way to opening the Hill Social, including a delay in obtaining his liquor license. In spite of the challenges, he’s hopeful that the success of projects like his are instrumental in bringing positive changes to the area.

“There’s so much possibility and untapped potential down here that it’s unreal to me,” he said. “It’s amazing what kind of renaissance could occur here with the right type of investment and political will.”

The dining room at Oreatha’s at the Point. Ben Gray for the Atlanta Journal-Constitution 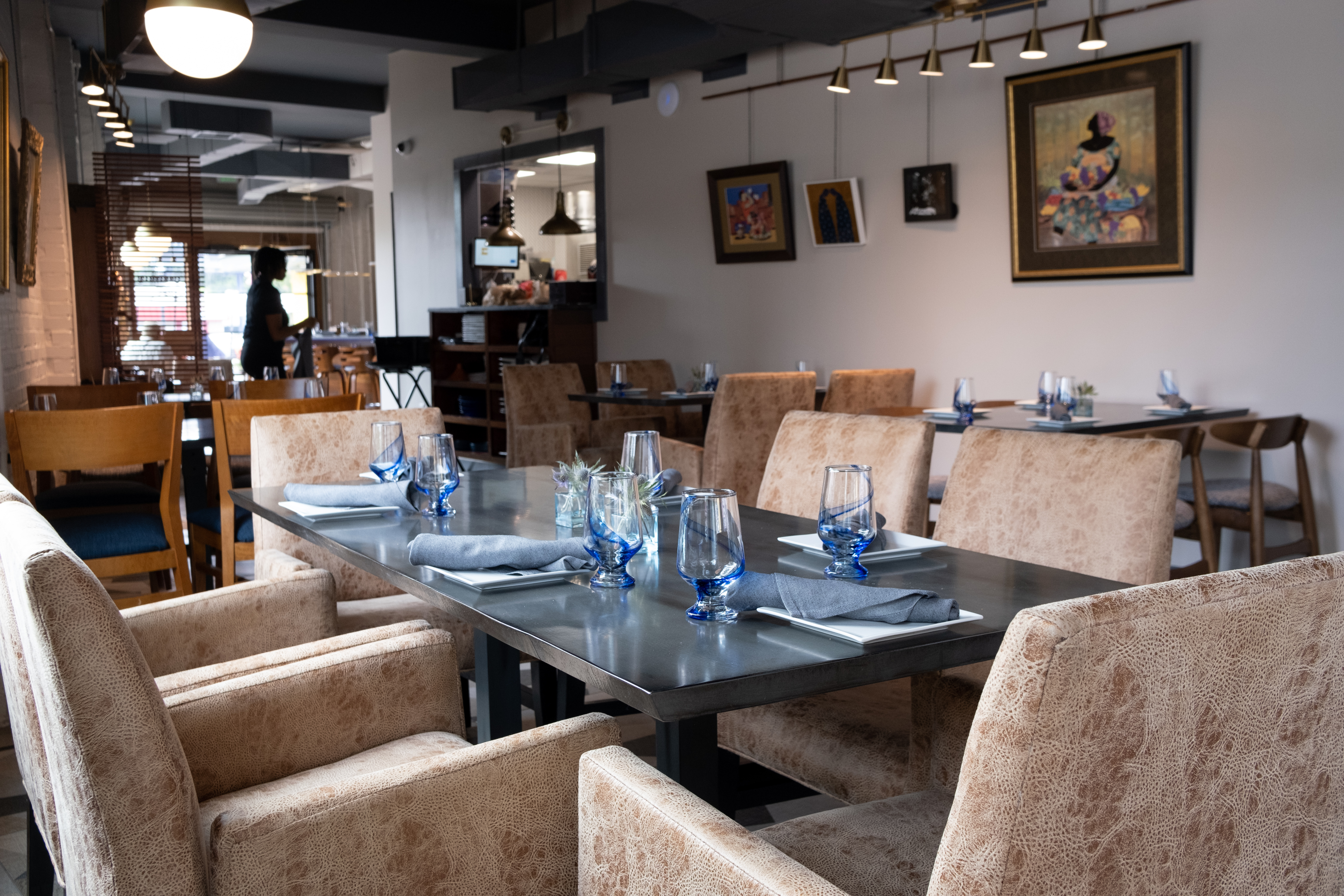 The dining room at Oreatha’s at the Point. Ben Gray for the Atlanta Journal-Constitution

Of course, even the most well-intentioned changes can have some unwanted consequences.

Liu said that while just one anchor restaurant likely won’t bring major sweeping changes to a neighborhood, multiple high-end eateries or bigger mixed-use developments can “change the flavor of a place” and prompt potential increases in housing and rent prices.

“It’s a tricky balance,” she said. “It has a lot of professors scratching their heads. Neighborhoods want development and investment, but they also want to make sure places remain affordable. I don’t see an easy solution to it.”

Larger projects, like the 35-acre mixed-use Summerhill development near the former Atlanta Braves stadium, bring with them lots of development at once, jump-starting the economic cores of those neighborhoods and, in some cases, bringing with them needed services. But working with existing residents to ensure they’re part of the process is key, Liu said.

The development firm, Carter, which is overseeing the rebirth of the Summerhill neighborhood where the Braves once played, has offices in a long-vacant building once owned by John Elder. Photo by Bill Torpy 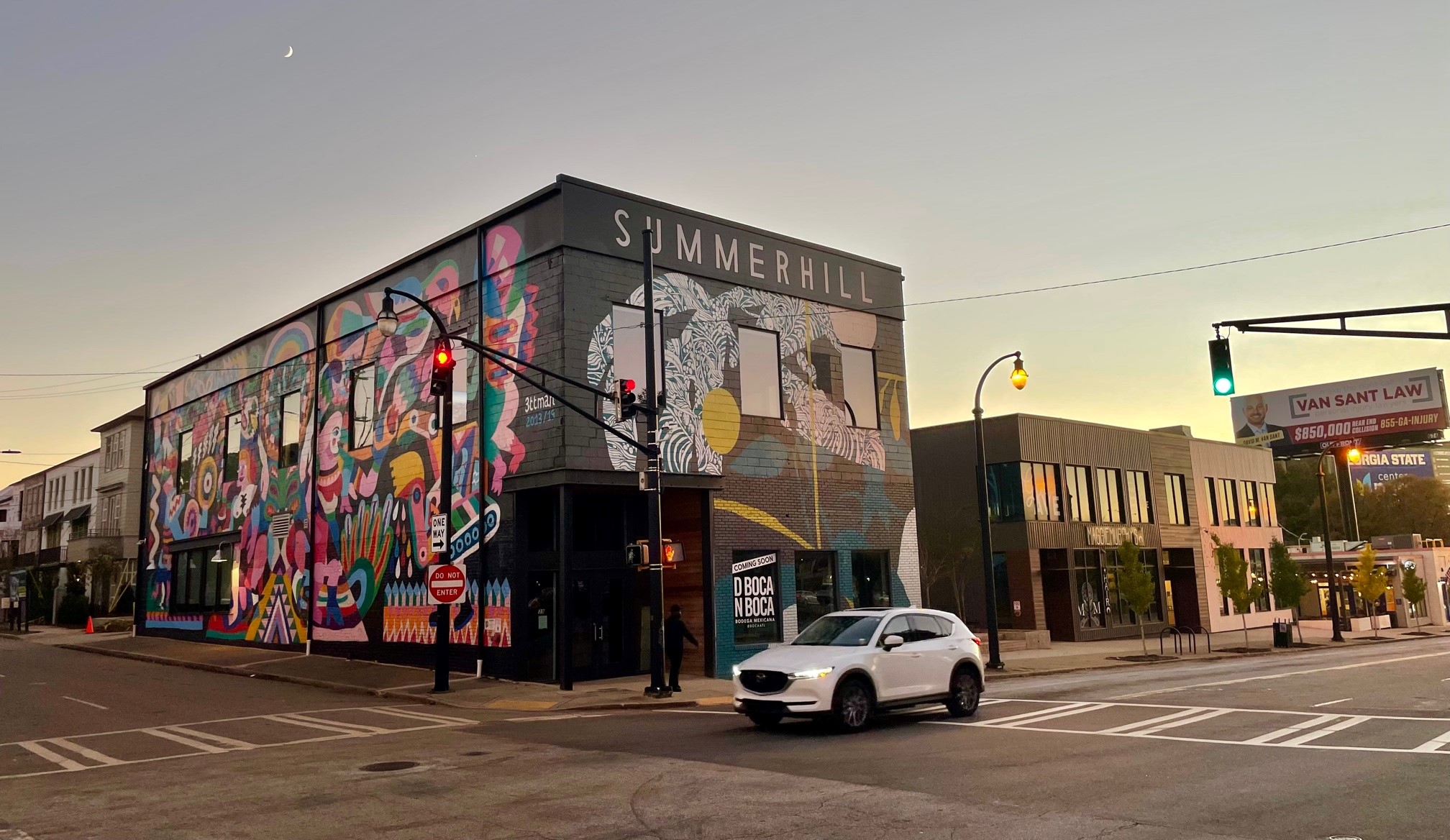 The development firm, Carter, which is overseeing the rebirth of the Summerhill neighborhood where the Braves once played, has offices in a long-vacant building once owned by John Elder. Photo by Bill Torpy

While the community has supported the project, Nelson acknowledges that working in historically underserved communities requires extra effort to make sure residents’ interests are served.

Transparency was a key component, he said. A Carter representative regularly attended the monthly Organized Neighbors of Summerhill meetings to provide updates on the project and get feedback from residents.

“Carter’s thoughtful and engaged redevelopment in Summerhill has helped us reintroduce our community to the region as the asset it is,” said John Helton, president of the Organized Neighbors of Summerhill, in a prepared statement. “Summerhill and our surrounding neighborhoods south of I-20 have been neglected and abused by decision-makers and developers for years, from interstate placement disrupting street grids to the stadium’s placement. We are centrally located to the interstate systems, the airport, downtown and Midtown. This level of attention and economic development is long overdue and more high-quality developers should be paying attention to the opportunities our neighborhoods present.”

Carter also worked with the neighborhood to help secure grants including a $200,000 award from non-profit Park Pride to improve neighborhood parks and partnered with MARTA to ensure that some of the transit group’s federal TIGER grant went toward getting rapid transit through Summerhill.

“There’s not really a silver bullet, but we try to be there to listen and partner together to try to figure it out,” he said.

Embry, who serves as a board member on the Cascade Heights Neighborhood Development Corporation (CHNDC), said it was essential to keep the organization updated throughout the planning process for Oretha’s “and listen to what the community wanted.”

She used as a guide a document created by the CHNDC, along with the Georgia Tech architecture department, based on a survey of what residents wanted to see in the neighborhood; one overriding desire was no more big box stores or national chains.

“I believe in this community so much,” Embry said of Cascade Heights. “I believe this area has the biggest ability because of the level of wealth and education to eliminate that total swing of gentrification that we’ve seen over and over across the country.”

Investing in the future

Embry and Van Trece are so convinced of the upward trajectory of Cascade Heights that they’re doubling down with two other concepts just steps from Oreatha’s at the Point. Latin soul restaurant Serenidad and speakeasy bar Dulcet will open in the coming weeks.

It’s a vision that will build on what Oretha’s has started, Van Trece said.

“It’s generational wealth that has been here all along,” she said. “Now you see this movement of diversity that is coming into the neighborhood. I think people are surprised when they come and see the rainbow they are looking at. It’s really this quiet kept secret. To be spearheading the revitalization is making me feel really good.”

Sign up for the AJC Food and Dining Newsletter