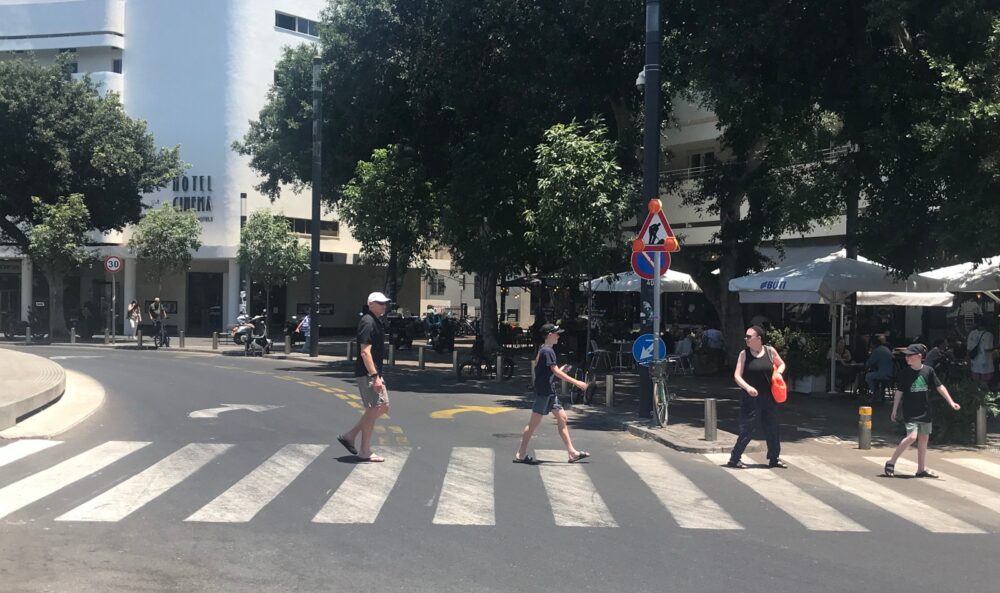 Dizengoff Street, a three-kilometer stretch of fashion, food and fun in the center of Tel Aviv, stretches north from Rothschild Boulevard up to Tel Aviv Port.

Named for Tel Aviv founder, town planner and first mayor Meir Dizengoff, this thoroughfare has something for everyone.

And that’s no exaggeration, considering the storefronts that line the street and the 400-plus businesses in Dizengoff Center, the first indoor shopping mall in Israel.

Walking along Dizengoff Street is such a beloved activity that the slang verb l’hizdangef was coined to describe it.

A typical day on Dizengoff has three distinct stages.

The first stage takes place during office hours when the coffee shops fill up with entrepreneurs, designers and realtors as well as local and international visitors.

Around 5pm, stage 2 is ushered in as dog owners take their pets for walks, and other locals can be seen jogging in sports attire on their way to the gym or beach.

Stage 3 begins around 7pm with happy hour at the many bars that line Dizengoff. By 9pm, chasers begin to fly as the bars fill up with those attending birthday parties and other celebrations. Restaurant tables also begin to get crowded at this stage. The latest closing time for diehard establishments is 5am. 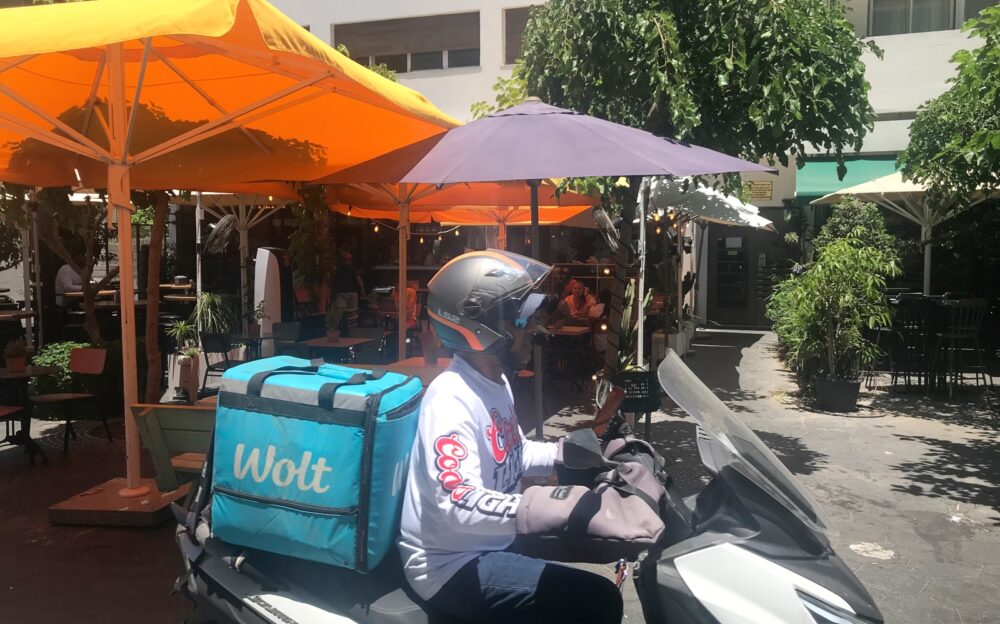 Dizengoff is a fashion destination, particularly if you are looking for that designer dress for a wedding or special event.

Among the many local designers represented on Dizengoff are Kedem Sasson at 203 and Orna Alami at 218. 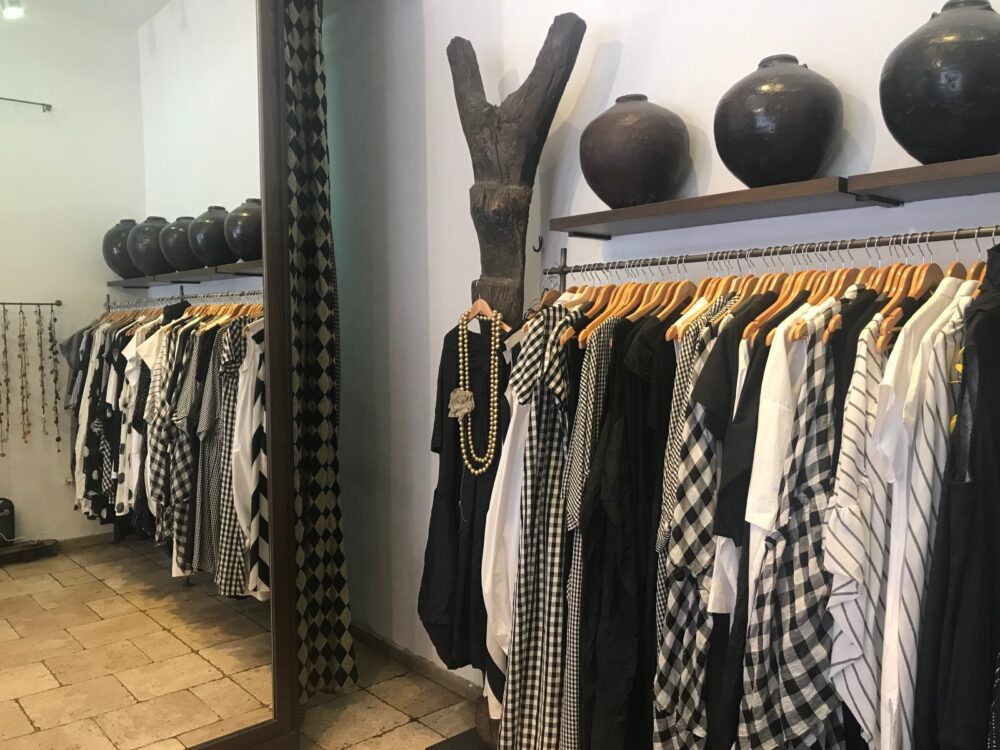 The street is also known for its bridal shops, which change hands frequently. Currently, wedding dress boutiques include Moransh Evening and Bride at 142, Helena Kolan at 243 and Dorin Fashion at 255.

For pleasing-to-the-eye and easy on-the-feet wedding and evening shoes, Aro Bridal Shoes at 118 has been in business since 1931.

In 2003, Tel Aviv was recognized by UNESCO as a unique architectural and cultural site. Its nickname, the “White City,” stems from the whitewashed, functional Bauhaus school (1919-1933) school of architecture that shaped much of the city’s urban landscape. 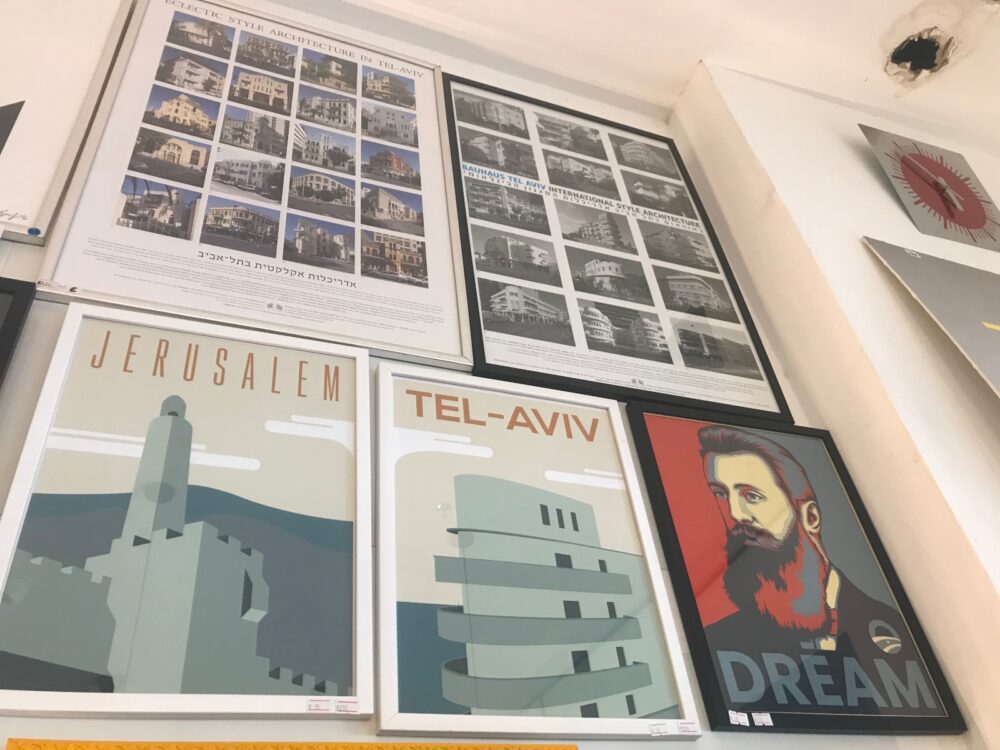 Display in the Bauhaus Center. Photo by Marion Fischel

Established in 2000 with the mission of educating the public about the German Bauhaus school dedicated to art, architecture and design, the Bauhaus Center at 77 Dizengoff combines a museum, an exhibition space and a shop dedicated to Bauhaus-influenced and original Israeli designs.

The only Bauhaus architecture tour operator authorized by the Tourism Ministry, the center offers its famous Bauhaus Center White City Tour every Friday at 10am. If you can’t make it, you can rent an audio guide (eight languages available) and take a self-guided tour. Either option will cost you 80 shekels per person. There are also private tours offered in English, French, German, Hebrew or Russian.

Dizengoff Center, designed by Israeli architect Itzhak Yashar of Tel Aviv Museum of Art fame, superseded a neighborhood built in 1922 for new immigrants and Jewish survivors of the bloody 1921 riots in Jaffa.

Built in stages over a decade starting in the early 1970s, the two-section shopping mall at the corner of King George Street straddles both sides of Dizengoff, linked by covered pedestrian bridges and underground passages. 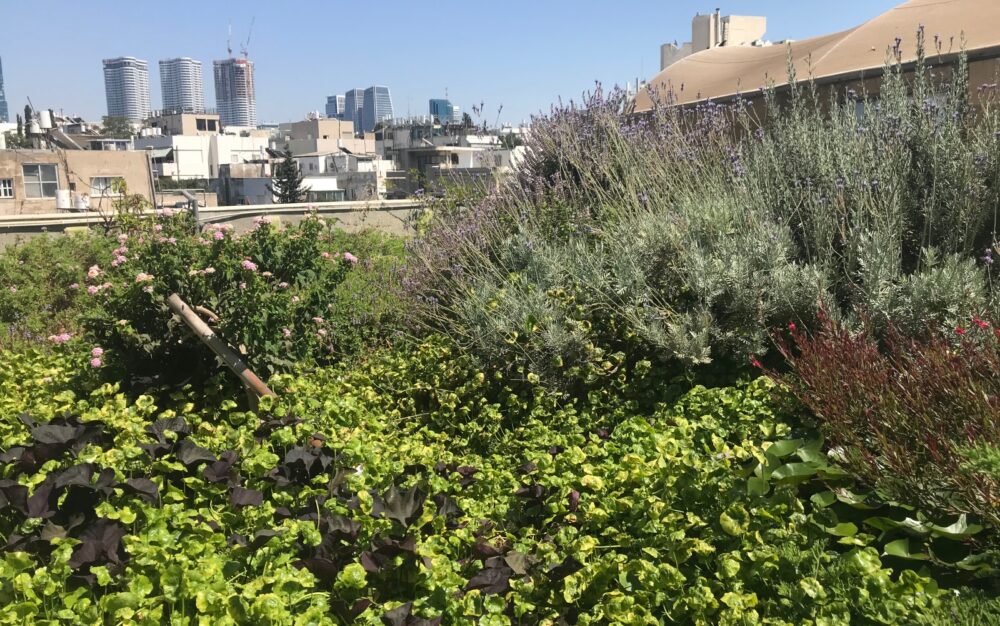 On and off the square

A stroll down Dizengoff will eventually bring the visitor to Dizengoff Square, named in tribute to the mayor’s wife, Zina Brenner Dizengoff.

Dizengoff Square, on the corner of Reines and Pinsker Streets, is an oasis of calm in the center of the city hustle. In the 1930s, the new square was the first wide public open space in the city. 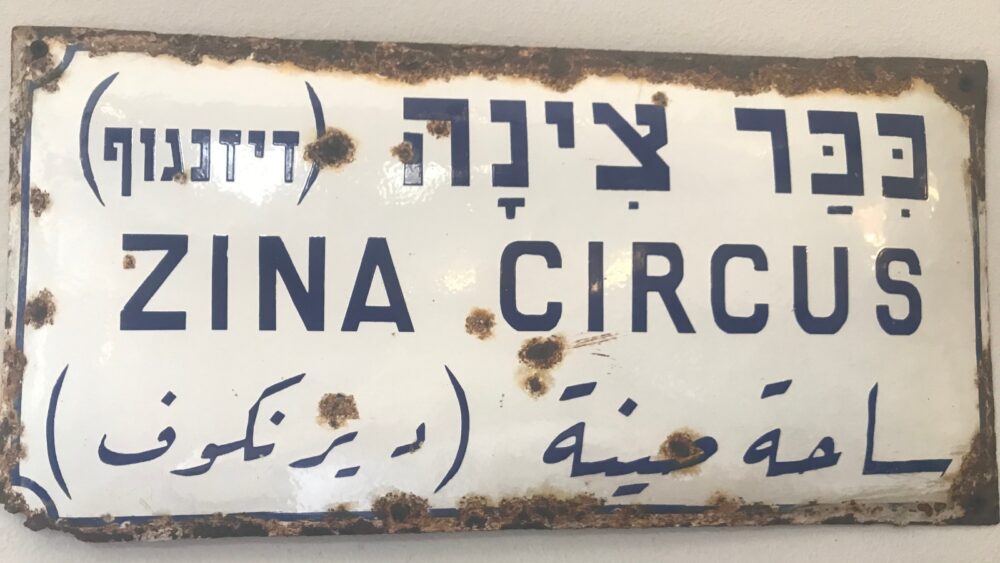 Locals like to complain about the loss of the colorful, iconic, Yaacov Agam kinetic fountain that dominated the square from 1986 to 2018, but the new gray water element is elegantly understated and lends the square a European vibe.

A paved area and sections of manicured lawn lined with benches and deck chairs complete the image of the area as a family-friendly venue during daytime hours.

Visitors can take a time-out at one of several sidewalk cafés around the square, notably Café Nachat at 1 Dizengoff Square, which sources, blends and roasts its own coffee beans.

Another popular spot close to the square is the aptly named two-story Café Popular at the intersection of Dizengoff and Arlozorov, inside the Jacob Samuel boutique hotel.

Behind the fountain, off the square is the café, bar and restaurant May 6 at 13 Ben Ami Street. It’s named after the owners’ earlier project, May 5, the first bar in Jerusalem’s Machane Yehuda market. The modest eatery serves up delicious vegetarian options as well as meat-based dishes.

Brunch at Little Paris in Tel Aviv is a French experience. The café is underneath the chic designer boutique hotel Cucu at 83 Dizengoff. 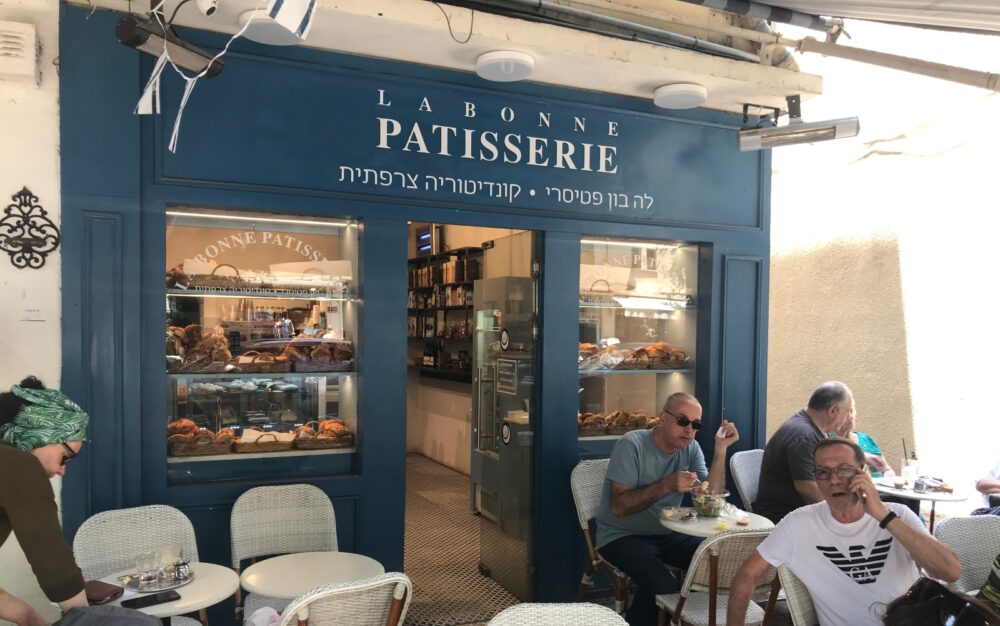 Speaking of pastries, many bakeries dot Dizengoff Street. We think the best croissants are to be had at La Bonne Patisserie, 209.

The owner of Big Pet at 225 Dizengoff, home to every treat your dog ever wanted, swears by Bakery at 260.

Looking for a venue for a special meal? FU Sushi at 302, open from midday to midnight, comes highly recommended for its artisanal designer sushi, great atmosphere and delicious cocktails.

Spicehaus Cocktails at 117 serves quality craft cocktails along with atypical bar food such as ceviche and cauliflower, in a classy atmosphere suitable for dates, from 6pm to 3am. 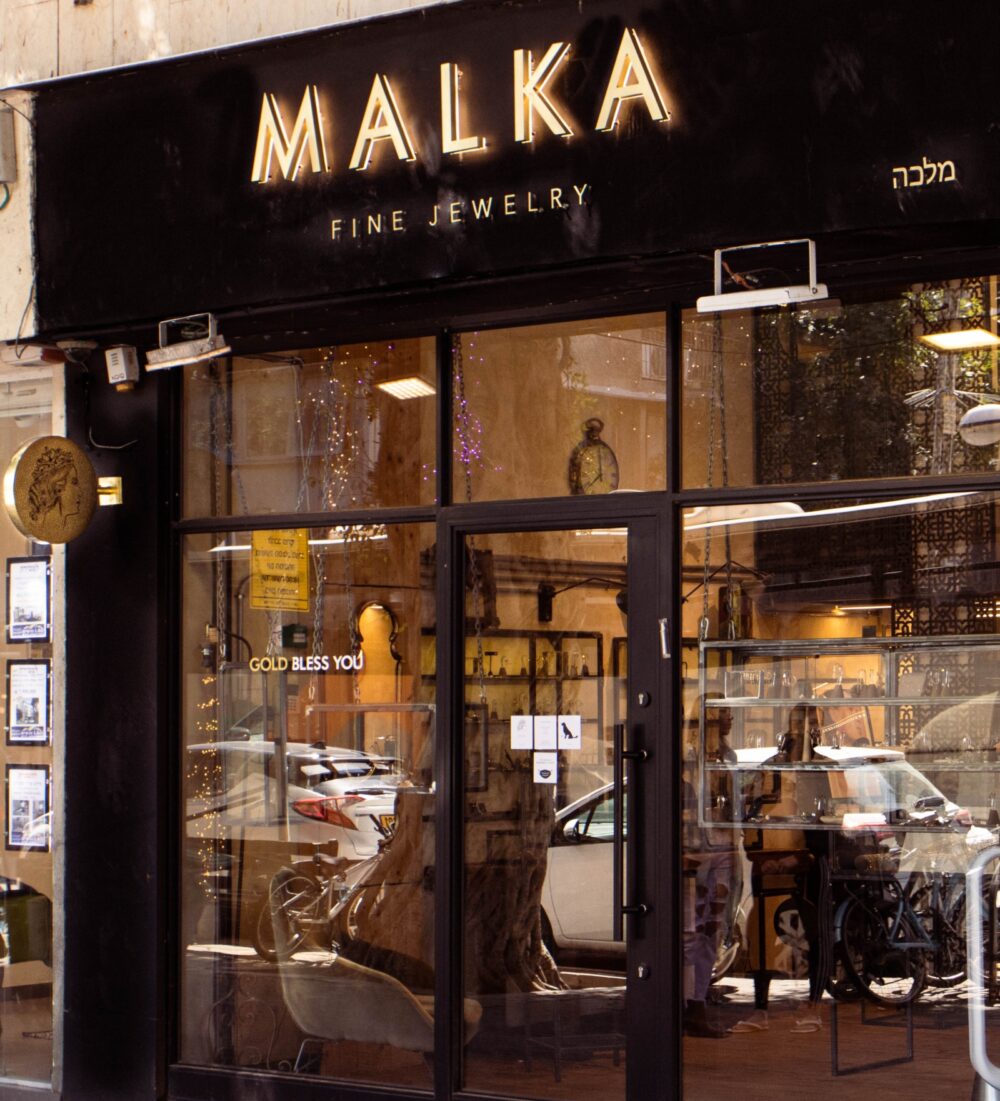 If it’s jewelry you’re after, Malka at 187 has exclusive and exquisite handmade and made-to-measure pieces not to be missed.

For antique and vintage jewelry, check out Antiquette at 184.

While the ever-present Golda ice cream parlor dazzles at 107, Mystic Artisan Ice Cream at 138 is on another level altogether. It is situated between Ben Gurion and Gordon Streets next to the 24/7 AM:PM at 136. 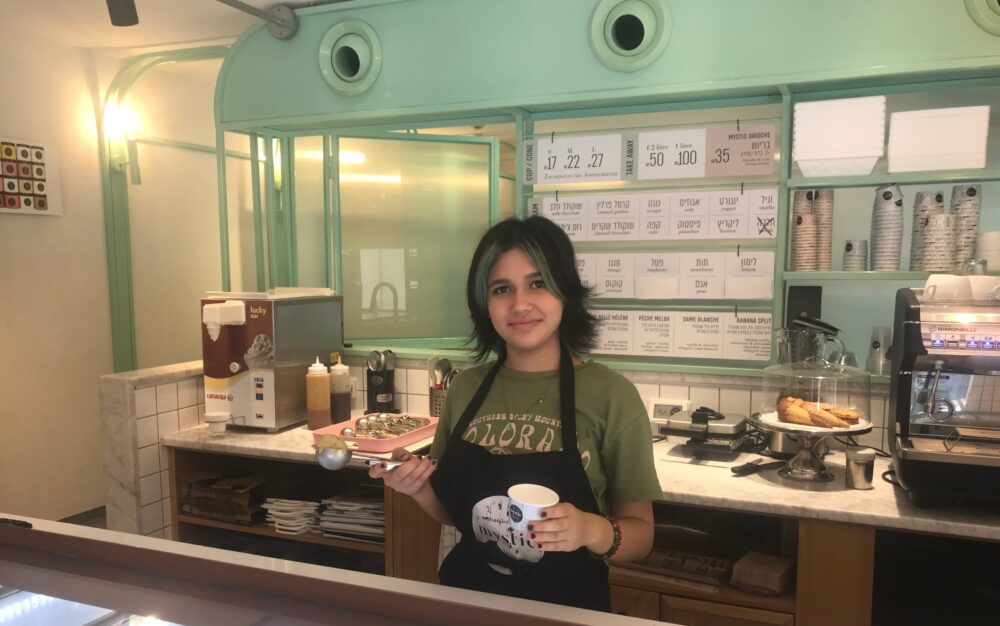 There’s another AM:PM at 193, conveniently located if you want to pick up something to snack on back at your hotel or apartment. There are also Tiv Ta’am stores (a food chain that stocks non-kosher products) at 16 and 199.

In need of a new look or just a routine haircut? While there are several barbers and hairstylists on Dizengoff, Avi Amir Hair Design at 112 is famed for its professional atmosphere, elegant decor and exquisite selection of alcoholic drinks to enhance the pampering experience. 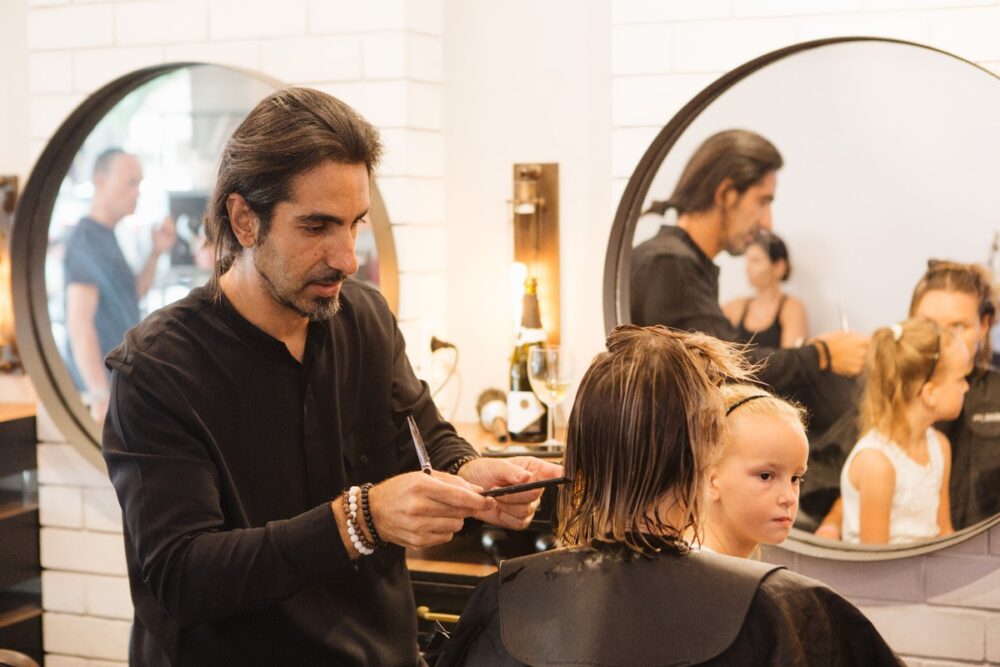 Pel Concept, established in 1976 by Hana Yarden, who still runs the shop, sells Japanese fashion for women at 76 Dizengoff.

Molecule offers a variety of high-priced niche perfumes from around the world at 70.

A hotel stay with a difference

Cinema Hotel, originally the Esther Cinema, one of Tel Aviv’s first, is a 1930s Bauhaus building on Dizengoff Square, although its official address is 1 Zamenhof Street. 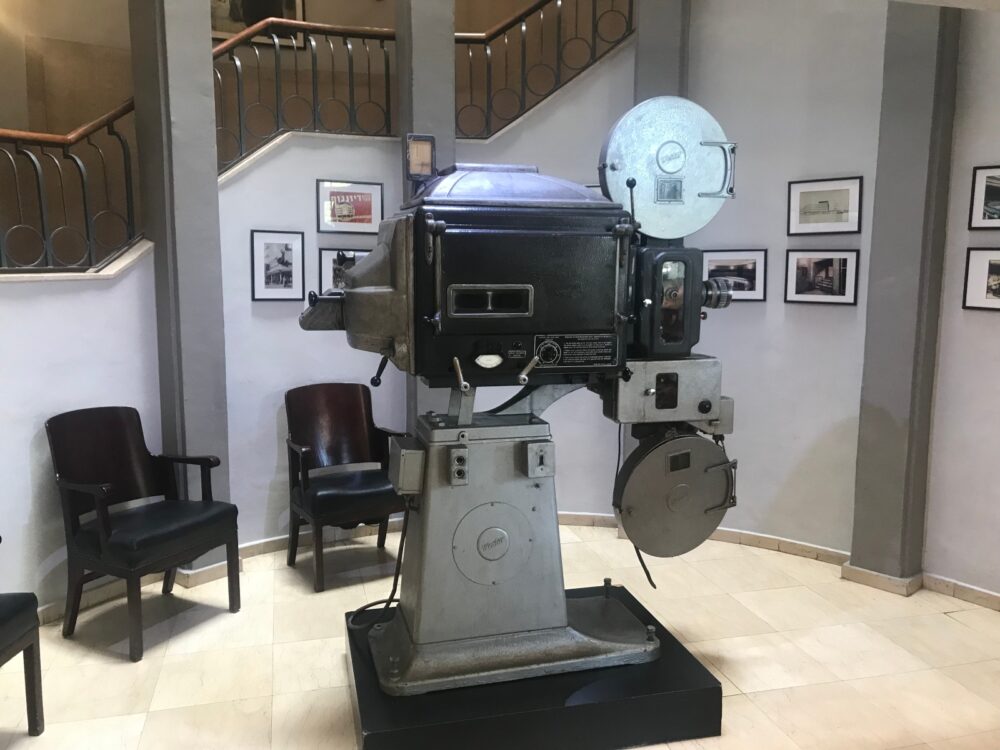 The charming Cinema Hotel at Dizengoff Square retains memorabilia from the movie theater that once stood here. Photo by Marion Fischel

The hotel’s charm stems from its former incarnation as a movie theater, with original memorabilia on display capturing a bygone era. The 83-room boutique hotel also has a spacious rooftop terrace.